Latin American Studies Presents - “From the Codex Saville to the Tira of don Martín: Reevaluating a Nahua Pictorial History” 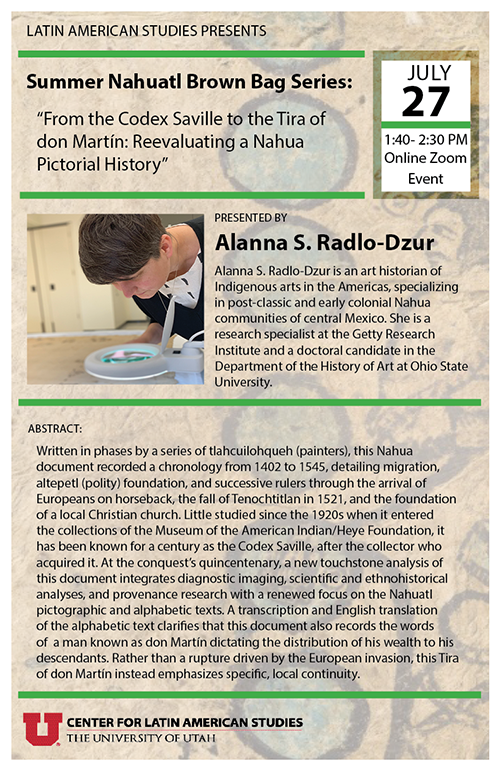 This event will be recorded and available on our YouTube channel.

Written in phases by a series of tlahcuilohqueh (painters), this Nahua document recorded a chronology from 1402 to 1545, detailing migration, altepetl (polity) foundation, and successive rulers through the arrival of Europeans on horseback, the fall of Tenochtitlan in 1521, and the foundation of a local Christian church. Little studied since the 1920s when it entered the collections of the Museum of the American Indian/Heye Foundation, it has been known for a century as the Codex Saville, after the collector who acquired it. At the conquest’s quincentenary, a new touchstone analysis of this document integrates diagnostic imaging, scientific and ethnohistorical analyses, and provenance research with a renewed focus on the Nahuatl pictographic and alphabetic texts. A transcription and English translation of the alphabetic text clarifies that this document also records the words of a man known as don Martín dictating the distribution of his wealth to his descendants. Rather than a rupture driven by the European invasion, this Tira of don Martín instead emphasizes specific, local continuity.

Alanna S. Radlo-Dzur is an art historian of Indigenous arts in the Americas, specializing in post-classic and early colonial Nahua communities of central Mexico. She is a research specialist at the Getty Research Institute and a doctoral candidate in the Department of the History of Art at Ohio State University.