What does your heart say?

With that direct and profound query, visiting Nahuatl instructors offer a glimpse into their living indigenous culture while also teaching verb conjugation and grammatical rules for possession to students enrolled in the summer Nahuatl program at the University of Utah. 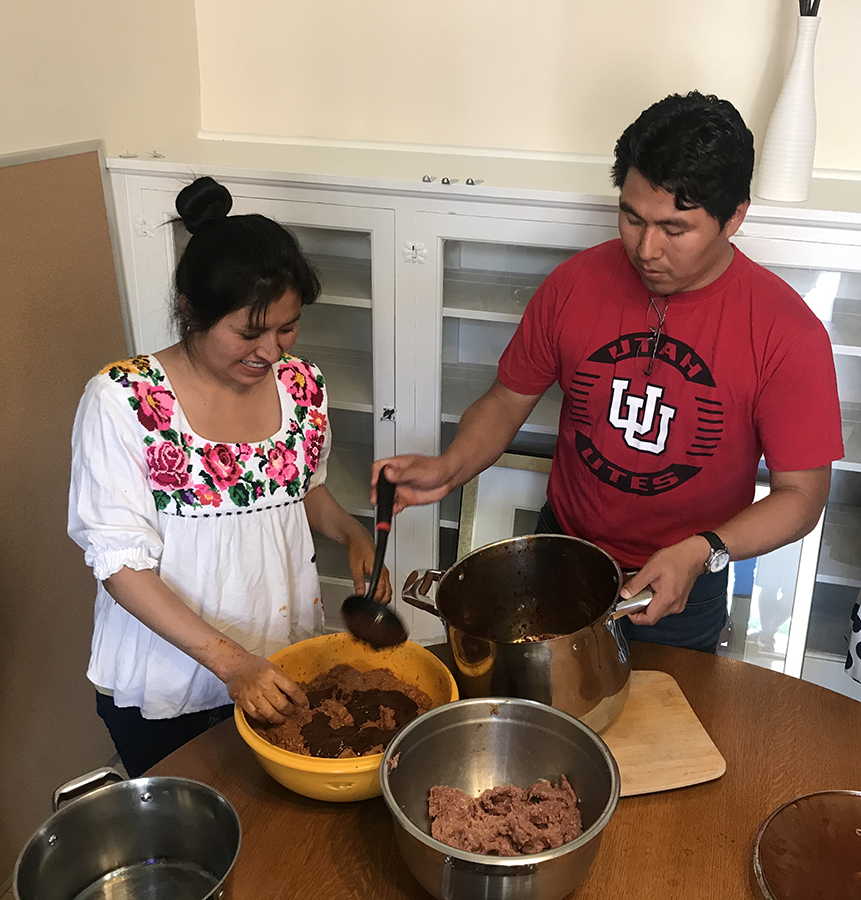 The Center for Latin American Studies is host to the inaugural Utah Nahuatl Language and Culture Program.  The annual six-week intensive program is offered in partnership with IDIEZ (the Instituto de Docencia e Investigación Etnológica de Zacatecas, Mexico), the institute that provides Nahuatl language instruction via distance learning during that academic year.  Five instructors from IDIEZ provide instruction in modern and classical Nahuatl for beginner, intermediate and advanced students.  Nahuatl is the most widely spoken indigenous language in Mexico with approximately 1.5 million speakers.

The 28 participants in the program represent a broad spectrum of institutions such as UC Berkeley, the University of New Mexico and Princeton.  In addition, the students bring a broad array of experiences, as undergraduates, graduate students, a local transfer student from Salt Lake Community College and a small number of local high school students participating in TRIOs Upward Bound summer program.

The program also partnered with the International Rescue Committee’s New Roots Program to identify a space in their gardens to plant corn during the program.  According to subdirector de la Cruz Cruz this year’s corn planting ceremony was a great success because of the location, in a field that is dedicated to working and harvesting.

While the modern language curriculum incorporates valuable cultural components there is also daily scheduled time for students to receive instruction on culturally relevant practices such as dances, theatre and traditional cross stitch or bordados in Spanish.  Rosa de la Cruz Cruz (no relation to Eduardo) instructs the bordados class in addition to the advanced language students.   “I learned to make bordados since I was a child.  All the women in my community learn how to cross stitch from a very young age, it’s very common in Nahua communities” she said in Spanish.  Her students are cross stitching designs of birds, flowers and butterflies onto tlaxcalyoyomitl, large napkins that are commonly used in Nahua communities to keep tortillas warm.  She shared that the students in her classes are very dedicated and oftentimes stay after class to continue working on their tlaxcalyoyomitl.

Carlos Cerecedo Cruz, advanced language instructor, concurs, he stated in Spanish that, “I’m surprised that all the students, who are not Nahuas, are so dedicated and interested in learning our language and culture”  De la Cruz added in Spanish, “ it makes me happy that our language is valued here.”

Brisa Zavala, Program Coordinator and Teaching Assistant, noted that one of the unique components of this year’s program are extracurricular presentations on other indigenous languages from the Americas. “Learning about the challenges that other indigenous communities face in terms of language revitalization helps us to have some perspective and make connections with other native groups” said Zavala.

“The Navajo and K’iche’ presenters were definitely a highlight” commented Ramón Francisco Hernández, an intermediate Nahuatl student from UCLA.  Hernández will complete a BA in Ethnomusicology this upcoming academic year and began taking Nahuatl via distance learning last year after a semester each of Italian and Chinese.  He said that the shift to Nahuatl came about as a recognition that “there’s a vast richness of languages in our own continent.”

The program will conclude with an afternoon of poetry and cultural performances that the students have practiced since the first day of the program.